AI and NLU are revolutionizing how engineers operate and troubleshoot their network infrastructure.

An alarm sets off at ABC Bank's Network Operating Center, interrupting the soft hissing of the server fans and making Jack almost choke on his tuna sandwich. His shift had begun just a couple of hours before and he was hoping for a quiet night, maybe just the usual calls from users pulling out all-nighters that had forgotten their passwords.

He glances at one of the large monitors in front of him and frowns at the big red dot signaling that something is not quite right. Instinctively, he asks his assistant: "Hey Webex, ask the network what’s going on". It responds immediately: "There's an issue with your application CorporateERP. Here is a graph of your application's performance over the last 60 minutes." The graph on the screen shows a big spike in the calls-per-minute metric that had occurred just a few minutes before.

Jack thinks hard trying to figure out what could be happening. He's aware of some routing issues that have been causing trouble lately, but he can't tell for sure if that's the root cause. He decides to ask his assistant for help: "Hey Webex, ask the network to do a path trace from the border router to server 1". It responds a couple of seconds later: "Here is the path trace you requested" while a network diagram appears on the screen, showing the path the network traffic takes to reach the application server where the ERP resides. Everything looks normal, except for the fact that there's an unusual delay between two of the routers in the path. This makes Jack believe that maybe the problem has to do with one of those routers.

He decides to escalate the case by opening a ticket and letting one of the level 2 routing engineers take care of the incident. He asks his assistant: "Hey Webex, ask the network to open a support ticket for this issue". It takes just a few seconds for the assistant to answer: "Your ticket number is INC0010093", while showing on the screen the details of the ticket just opened. Relaxed, at last, Jack says: "Hey Webex, thanks for your help!". "Anytime!" responds his assistant. Then, smiling, he takes another big bite from his tuna sandwich and goes on with his work.

Ok, of course, this is yet another futuristic, totally conceptual, too-good-to-be-true use case, way out of the reach of current technology. Right? Well, not really. This actually exists today.

There are several technologies involved in this scenario. Following is a description of each one:

The following diagram illustrates how the different parts integrate to provide the rich experience showcased above:

The various technologies powering the experience

For the Network Operations Center (NOC) use case, we trained the ML model to work with the following NLP model hierarchy:

Let's analyze each layer in the hierarchy:

Because this use case has to do only with NOC-related topics, we are recognizing only one domain, called simply the "noc" domain.

For this specific use case we defined the following three intents:

Note that, in the case of the path-tracing intent, the user has to specify the origin and the destination of the trace in their query. These two pieces of information are known as "entities" and are like variables that have to be resolved to specific values by the NLP engine. Once resolved, the business logic can then perform the necessary treatment to that data to produce the desired output.

This is the network topology the user is referred to in order to choose the source and destination devices for the trace: 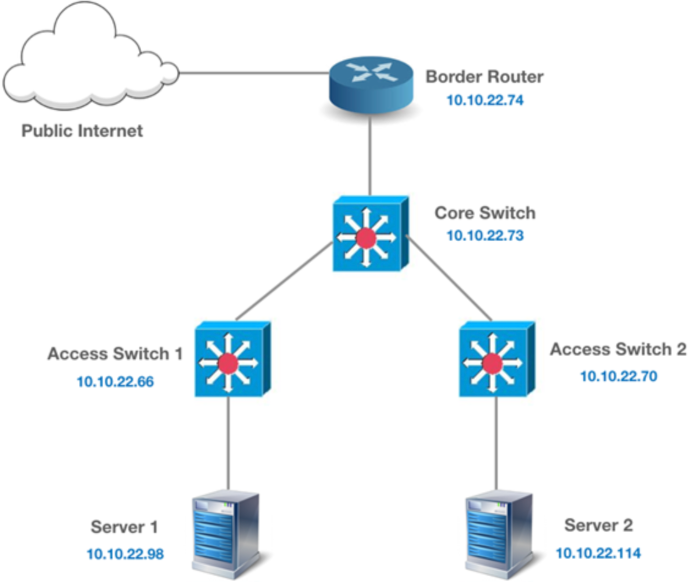 Note that the user could potentially use very different words to specify the devices. That's why the model has to be trained with as many examples as possible of different ways the user might refer to the entities. Here is a list of possible values for the "device" entity that were used to train the model:

Continuing with the path-tracing intent, note that we need both the source and the destination devices for the trace. This means that two different instances of the same entity have to be recognized for the query to make sense. To achieve this, the training phrases have to specify not only which words or phrases should be recognized as entities, but the "role" each of these entities play as well.

Following are some sample phrases from this intent:

Note that the user can potentially specify the source and destination devices in any order, depending on the phrasing chosen, so the training phrases should account for this possibility and include examples of both types.

MindMeld is quite different from other NLP frameworks on the market today. First of all, the choice of programming language couldn't have been better. Python is one of the easiest and most powerful programming languages available today, with a huge amount of libraries and documentation out there.

Then there's the extremely straightforward model-specification paradigm. To add a new intent to your model, just create a new folder with the name of the intent and put it in a text file called “train.txt” with the training phrases for that intent, and you're good to go. To create a new entity, add a folder to the "entities" directory with a text file called “gazeteer.txt” containing sample values for your entity.

Another attribute that enhances the framework's flexibility is the fact that you can deploy MindMeld completely on-premise without the need to rely on the cloud for anything. This is especially useful in some security-sensitive environments where data should never leave the customer premises.

The entity recognition, role classification and entity resolution capabilities are extremely easy to use. For the path-trace intent, in just a few lines of code we are able to resolve both the source and destination devices to a canonical name that could be used in regular business logic code:

While the user could have specified the device with very open words or phrases such as "border router," "main switch" or "second server"; the "source_device" and "destination_device" variables are guaranteed to hold only the following canonical values: router, core-switch, access-switch-1, access-switch-2, server-1, and server-2. This is achieved by specifying all possible synonyms for each entity value in a file called “mapping.json,” which contains a “whitelist” with the synonyms and their corresponding canonical name “cname”: 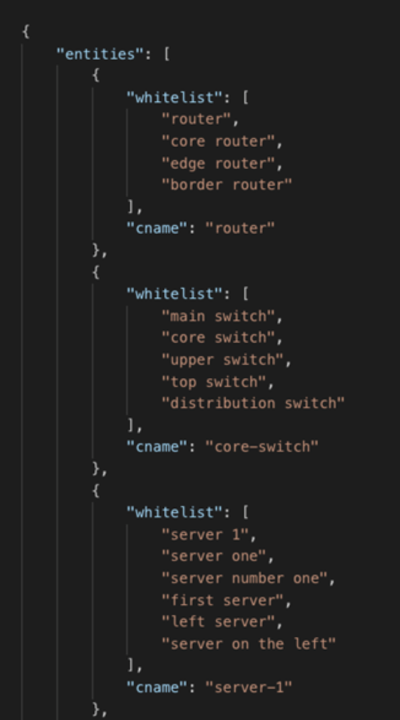 Rafael Campos is the SVP of Growth Initiatives at Altus Consulting