In this step-by-step walkthrough, you'll build a conversational application that allows users to browse and find movies and TV shows from a large content catalog, using the MindMeld blueprint for this purpose.

Please make sure to install and run all of the pre-requisites for MindMeld before continuing on with this blueprint tutorial.

Through a conversational interface, users should be able to browse a content catalog of movies and TV shows, then play what they find through a service similar to Netflix, Hulu, or Amazon Video.

The conversational flows for video discovery can be highly complex, depending on the desired app functionality and the amount of user guidance required at each step. Enumerating and finalizing all anticipated user interactions requires multiple iterations.

Here are some examples of scripted dialogue interactions for conversational flows. 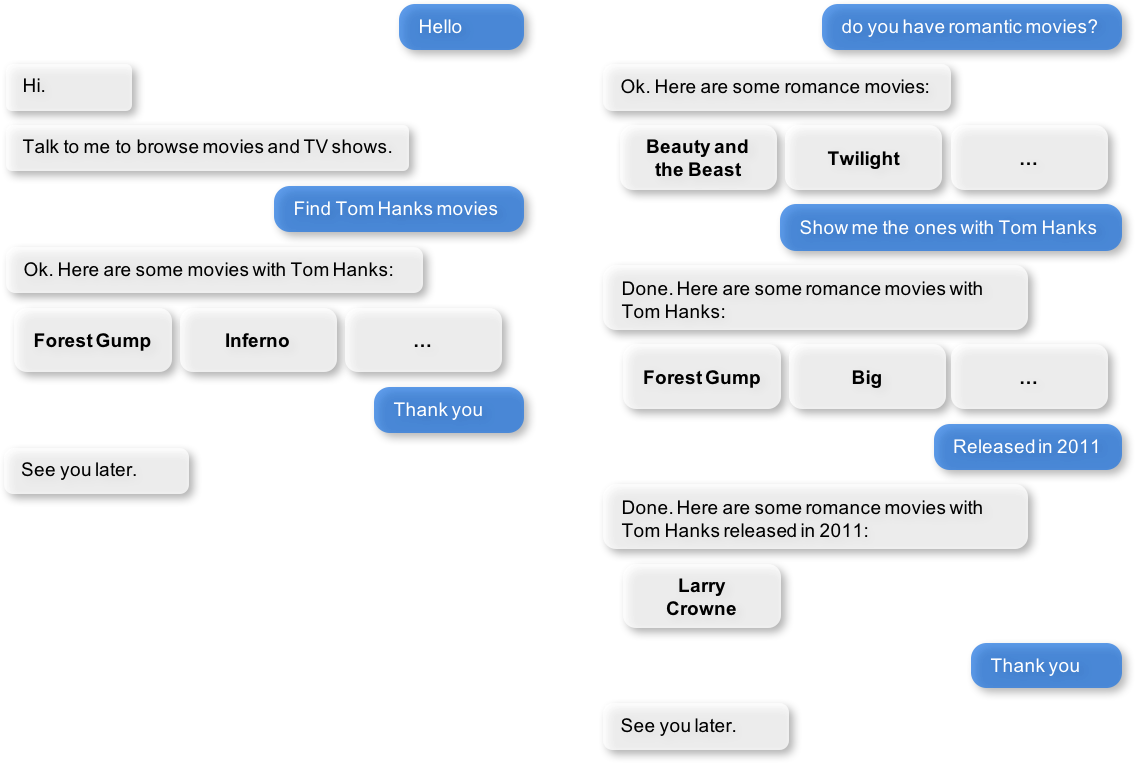 Users should be able to search for video content using common filters such as: genre, cast, release_year, and so on. They should be able to continue refining their search until they find the right content, and to restart the search whenever they like. Generic actions like greeting the user, providing help, and responding to insults and compliments should also be supported.

Based on this desired functionality, the developers of the video discovery app created the NLP model hierarchy below.

The are two domains:

The unrelated domain supports the intents:

Only the browse intent requires entity recognition; it supports the following entity types:

While the blueprint provides a good starting point, you may need additional intents and entities to support the desired scope of your app. Enumerate some other intents (e.g., get_cast_in_video, get_release_year_for_video, and so on) and entities (e.g., writers, budget, and so on) that make sense for a video discovery use case.

To train the different machine learning models in the NLP pipeline for this app, we need labeled training data that covers all our intents and entities. To download the data and code required to run this blueprint, run the command below in a directory of your choice.

This application requires Elasticsearch for the QuestionAnswerer. Please make sure that Elasticsearch is running in another shell before proceeding to setup this blueprint.

This should create a MindMeld project folder called video_discovery in your current directory with the following structure: 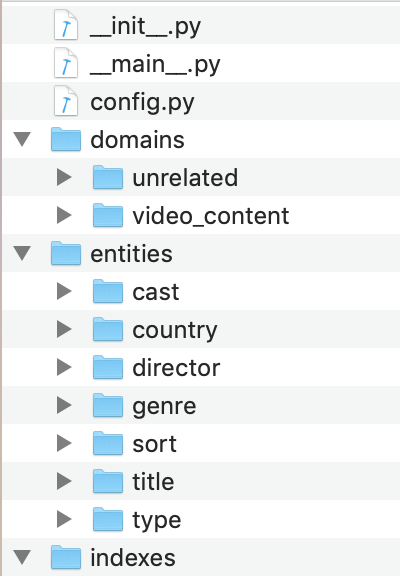 To support the functionality we envision, our app needs one dialogue state for each intent, as shown in the table below.

All dialogue states and their associated handlers are defined in the __init__.py application container file at the top level of the blueprint folder.

Handler logic can be simple, complex, or in between. At one end of this spectrum, the handler simply returns a canned response, sometimes choosing randomly from a set of responses. A more sophisticated handler could execute knowledge base queries to fill in the slots of a partially-templatized response. And a handler that applies more complex business logic could call an external API, process what the API returns, and incorporate the result into the response template.

The handler logic is fairly straightforward for most of our dialogue states. The main actions are choosing from a set of pre-scripted natural language responses, and replying to the user. These simple states include welcome, start_over, say_goodbye, provide_help, handle_unsupported, say_something_nice, handle_insult and default.

For example, here's the say_goodbye state handler, where we clear the dialogue frame and use the responder object to reply with one of our scripted "goodbye" responses:

By contrast, the handler logic for the show_content dialogue state is more substantial, because it contains the core business logic for our application. In this dialogue state handler, we use the Question Answerer to process the transaction.

You can see this in the general implementation of the show_content handler:

This code follows a series of steps to build the final answer to the user: it updates the dialogue frame with the new found entities, fetches results from the knowledge base (in the get_video_content method), builds a response with the new entities (done in browse_slots_for_frame and build_browse_response), and sends a response to the user.

For more information on the show_content method and the functions it uses, see the __init__.py file in the blueprint folder.

For example, here's the knowledge base entry in the videos index for "Minions," a comedy movie in 2015:

Another entry in the videos index is for "The Big Bang Theory," a comedy TV show from 2007:

Assuming that you have Elasticsearch installed, running the blueprint() command described above should build the knowledge base for the video discovery app by creating the one index and importing all the necessary data. To verify that the knowledge base has been set up correctly, use the Question Answerer to query the indexes.

Make sure that Elasticsearch is running in a separate shell before invoking the QuestionAnswerer.

The labeled data for training our NLP pipeline was created using both in-house data generation and crowdsourcing techniques. See Step 6 of the Step-By-Step Guide for a full description of this highly important, multi-step process. Be aware that at minimum, the following data generation tasks are required:

Train a baseline NLP system for the blueprint app. The build() method of the NaturalLanguageProcessor class, used as shown below, trains the NLP system using the annotated data.

During active development, it helps to increase the MindMeld logging level to better understand what's happening behind the scenes. All code snippets here assume that logging level has been set to verbose.

To see how the trained NLP pipeline performs on a test query, use the process() method.

For the data distributed with this blueprint, the baseline performance is already high. However, when extending the blueprint with your own custom video discovery data, you may find that the default settings may not be optimal and you could get better accuracy by individually optimizing each of the NLP components.

Start by inspecting the baseline configurations that the different classifiers use. The User Guide lists and describes the available configuration options. As an example, the code below shows how to access the model and feature extraction settings for the Intent Classifier.

You can experiment with different learning algorithms (model types), features, hyperparameters, and cross-validation settings by passing the appropriate parameters to the classifier's fit() method.

For example, you can change the feature extraction settings to use bag of trigrams in addition to the default bag of words:

You can use similar options to inspect and experiment with the Entity Recognizer and the other NLP classifiers. Finding the optimal machine learning settings is a highly iterative process involving several rounds of model training (with varying configurations), testing, and error analysis. See the User Guide for more about training, tuning, and evaluating the various MindMeld classifiers.

Experiment with different models, features, and hyperparameter selection settings to see how they affect classifier performance. Maintain a held-out validation set to evaluate your trained NLP models and analyze misclassified test instances. Then, use observations from the error analysis to inform your machine learning experimentation. See the User Guide for examples and discussion.

The relationships between entities in the video discovery queries are simple ones. For example, in the annotated query content with {Tom Hanks|cast}, the cast entity is self-sufficient, in that it is not described by any other entity.

If you extended the app to support queries with more complex entity relationships, it would be necessary to specify entity groups and configure the parser accordingly. For example, in the query show me a {Tom Hanks|cast} {movie|type} and a {Jim Parsons|cast} {TV show|type}, we would need to relate the cast entities to the type entities, because one kind of entity describes the other. Each pair of related entities would form an entity group. For more about entity groups and parser configurations, see the Language Parser chapter of the User Guide.

Since we do not have entity groups in the video discovery app, we do not need a parser configuration.

In general the show_content handler retrieves documents from the knowledge base in different ways, depending on the entities found in the user's queries.

Look at the show_content implementation in __init__.py to better understand the different ways you can leverage the knowledge base and Question Answerer to provide intelligent responses to the user. See the User Guide for an explanation of the retrieval and ranking mechanisms that the Question Answerer offers.

Think of other important data that would be useful to have in the knowledge base for a video discovery use case. Identify the ways that data could be leveraged to provide a more intelligent user experience.

Once all the individual pieces (NLP, Question Answererer, Dialogue State Handlers) have been trained, configured, or implemented, use the Conversation class in MindMeld to perform an end-to-end test of your conversational app.

The say() method packages the input text in a user request object and passes it to the MindMeld Application Manager to simulate a user interacting with the application. The method then outputs the textual part of the response sent by the app's Dialogue Manager. In the above example, we requested movies from a particular actor, in a single query. The app responded, as expected, with an initial response acknowledging the filters used and a list of videos.

You can also try out multi-turn dialogues:

Test the app multiple times with different conversational flows. Keep track of all cases where the response does not make good sense. Then, analyze those cases in detail. You should be able to attribute each error to a specific step in our end-to-end processing (e.g., incorrect intent classification, missed entity recognition, unideal natural language response, and so on). Categorizing your errors in this manner helps you understand the strength of each component in your conversational AI pipeline and informs you about the possible next steps for improving the performance of each individual module.

Refer to the User Guide for tips and best practices on testing your app before launch.