Working with the Language Parser¶

Not every MindMeld app needs a parser.

This is an in-depth tutorial to work through from start to finish. Before you begin, read the Step-by-Step Guide, paying special attention to Step 8.

In this guide, the terms language parser and parser are interchangeable. To understand how the parser works, you need to understand entity groups.

The main entity in an entity group is the head entity. The other, dependent entities, are attributes of the main entity. The terms, head and dependent, reflect the linguistic (syntactic) function of the entities within the group.

Head and dependent entities are also called parent and child entities, respectively. This is because the hierarchy inherent in any entity group can be seen as a tree data structure, where parent and child denote the relationship between the nodes in the tree representation.

Figure out whether your app needs a parser¶

Your MindMeld app needs a language parser only if both the conditions in the table below are true.

If the conditions are both true, your app needs a parser to identify the head-dependent relationships between the recognized entities in the query, and to cluster them together into meaningful entity groups.

In the simple Kwik-E-Mart store assistant app, neither of the two entity types (store_name, sys_time) describes the other. No entity of one type is directly related to any entity of the other.

The first condition is false, so there is no need for a parser.

The home assistant blueprint app is only designed to support the operation of one appliance per query. Queries in which a user references two different appliances, e.g., "Switch off the {living room|location} {tv|appliance} and turn on the {bedroom|location} {tv|appliance}," are not supported. For this reason, the app assumes that all dependents must refer to a single head entity in any query.

Only one condition is true, so there is no need for a parser.

In the food ordering blueprint, entities of type option and sys_number are dependents of dish entities, since they provide information about the dish being ordered.

Users can order multiple dishes in the same query, e.g., "Two hamburgers with extra cheese, an order of garlic fries, and a diet coke." The app must determine which options and quantities apply to which dishes, and group them sensibly to ensure that the correct order is placed.

Both conditions are true, so the app needs a parser.

The rest of this chapter assumes that your app needs a parser. If not, you can skip to the next chapter.

How the configuration instructs the parser¶

Using the head-dependent relationships defined in the configuration, the parser analyzes the detected entities in a query and hypothesizes different potential ways of grouping the entities together. Each such grouping is called a candidate parse. After generating these parse hypotheses, the parser uses a set of linguistically-motivated heuristics to pick the most likely candidate.

Think about whether your app must support queries where (1) there are multiple head entities of the same type, and (2) those head entities have many potential dependents. For example, "Get me a pepperoni pizza with extra cheese, a calzone, and two diet cokes." Such a query is inherently ambiguous because there is more than one way to group its entities that satisfies the head-dependent relationships a simple configuration can define. For apps that deal with queries like this, fine-tuning the settings available in the advanced configuration is highly recommended. Later in this chapter, we explore this issue in detail.

Learn how to create a simple parser configuration¶

The first step toward running the parser is creating the simple configuration described in this section.

The configuration is a dictionary where each key-value pair instructs the parser to (1) look for a specific head entity in the query, and (2) cluster that head entity with one or more specified dependent entities to form an entity group.

Let's define a PARSER_CONFIG to see how to apply these principles. This example is for the food ordering blueprint.

Write out (or better yet, diagram) the entities in your app and how they are related. Then think through how to capture those relationships in a PARSER_CONFIG dictionary that maps each head entity type to a list of related dependent entity types, as explained in the previous section.

Define the simple PARSER_CONFIG dictionary and add it to your config.py.

Load the configuration by calling the build() method on the NaturalLanguageProcessor class.

The parser runs as the last step in the NLP pipeline, building on top of the information provided by all the previous NLP models. The most convenient way to run a configured parser is to use the NaturalLanguageProcessor.process() method, which sends the query for processing by each NLP pipeline component in sequence, then returns the aggregated output from all the components.

In the output of NaturalLanguageProcessor.process():

For more about this output dictionary, see Run the NLP pipeline.

Here's an example from the food ordering blueprint.

Inspect an individual entity. We'll choose the only entity which has a dependent: "chicken kebab" (dish), whose dependent is the entity "two" (sys_number).

The remaining entities in the query, "mujaddara wrap" (dish) and "palymra" (restaurant), are childless because the parser found no dependent entities for them. This example thus has three entity groups in total: {"two", "chicken kebab"}, {"mujaddara wrap"}, and {"palmyra"}.

The parser does not assign a 'children' property to an entity when any of the following are true:

Test out the preconfigured parser and experiment with different configuration settings, using the food ordering blueprint as a sandbox. Study the blueprint's application file (__init__.py) for examples on how to use parser output within dialogue state handlers. Continue this exercise until you the language parser and its capabilities feel familiar to you.

Your app should exhibit decent baseline parsing accuracy out-of-the-box using default parser settings. To improve its accuracy further, you can optimize the parser settings for the nature of your data. If you decide to experiment in this way, run your parser using an advanced configuration as described in the next section.

Learn how to create an advanced parser configuration (optional)¶

MindMeld offers an advanced parser configuration format to provide fine-grained control over parser behavior. While both the simple and the advanced configurations define head-dependent relationships, in the advanced configuration you can specify that only a dependent entity that satisfies certain constraints can be attached to a compatible head entity. If chosen well, these constraints can help eliminate potentially incorrect parse hypotheses, resulting in significantly improved parsing accuracy.

The table below enumerates the settings you can define in the per-dependent configuration.

Let's define an advanced parser configuration that sets up the same head-dependent relationships as the simple configuration for food ordering in the previous section, but that defines constraints for each dependent.

The desired per-dependent constraints are:

The first constraint is motivated by natural language constructs like "a burger with a side of fries" or "chicken biriyani with cucumber raita" where the intervening word "with" implies a dish-option relationship. The other two settings embody real-world constraints (a thing cannot be described by more than one quantifying adjective) and English grammar rules (an adjective generally appears before the noun it describes).

The syntactic and semantic cues that these constraints provide help the parser weed out nonsensical parses. To see this, consider three possible candidate parses for a sample food ordering query: 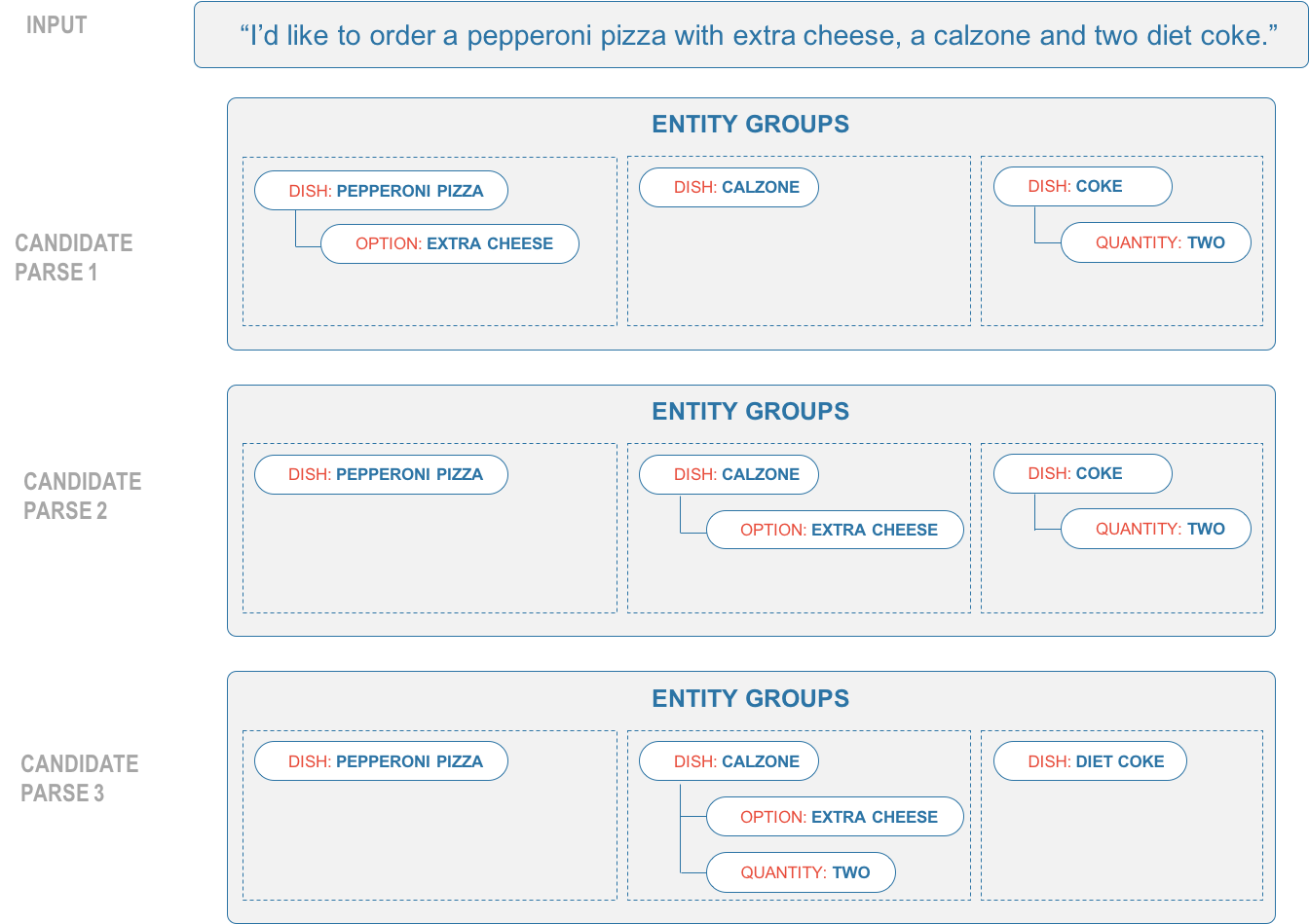 A baseline parser using the simple configuration will reject the incorrect third candidate and choose the second hypothesis, which is better, but still not fully correct. A parser configured using the per-dependent settings, on the other hand, will correctly choose the first parse based on its knowledge of the linking word, "with".

What is significant about the query above is that it contains multiple head entities of the same type with many potential dependents. It is inherently ambiguous because there is more than one way to group its entities that satisfies the head-dependent relationships a simple configuration can define. To optimize parser performance, we needed to define constraints that help the parser eliminate nonsensical candidate parses.

Experimenting with an advanced configuration (optional)¶

Once you have defined an advanced configuration, load the configuration, and run the parser. Observe the effects of your per-dependent configuration settings on parser accuracy, and if desired, iterate on the whole process.