A supervised learning model is only as smart as its underlying training data. Therefore, generating comprehensive and representative training data is critical to ensure the success of any application. High-quality data, also called labeled data, is not only the substrate upon which your models are built — it is also the yardstick used to measure performance. By standard practice, a portion of your labeled data always serves as the 'ground truth' used to score the accuracy of your underlying model. When you judge one model against another, the model whose output is closer to the 'ground truth' is the better model. As you might imagine, this 'ground truth' can only be a meaningful metric if derived from labeled data which accurately depicts desired application performance.

Many different strategies exist for generating training data. Which approach is best depends on the stage of development your application is in and the scope of your particular use case. For new applications that are not yet receiving any production traffic, training data sets are typically generated using manual data entry or crowdsourcing. In some cases, data sets can be derived by mining the web. For live applications with production traffic, data sets can sometimes be generated either from customer traffic logs or by instrumenting the application to collect user interaction signals. In all cases, multiple layers of quality assurance are typically required to ensure that the training data is high-quality, error-free, and representative of desired application performance.

Five of the core supervised learning components in MindMeld rely on training data. Depending on the use case, a given application may need data for some or all of these components:

As described in Step 3, the structure of your application's root directory in MindMeld organizes the training data files. For our example Kwik-E-Mart store information application, the application directory is shown below. 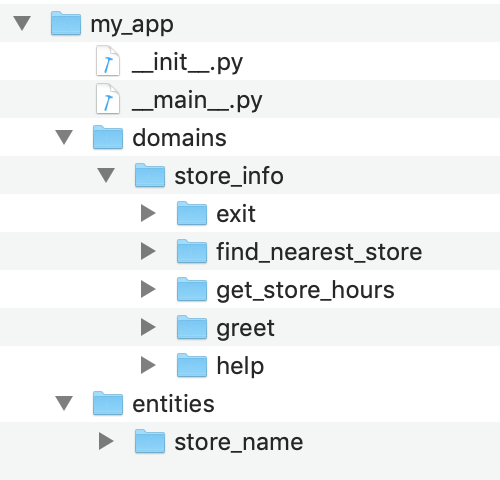 While training data is always stored in text files, there are two different types of data files used for training in MindMeld. These types of training data files, and their mandatory locations, are described in the table below.

We will now illustrate the typical structure for these two types of training data files.

Labeled query files are the primary source of training data for the MindMeld natural language processing classifiers. They are text files containing annotated example queries, one per line. Each file should contain queries which apply to a single intent only. All the labeled query files for a given intent must be placed in the folder for that intent, which is a subfolder of the domains folder. For our example Kwik-E-Mart application, the domains directory could be organized as follows. 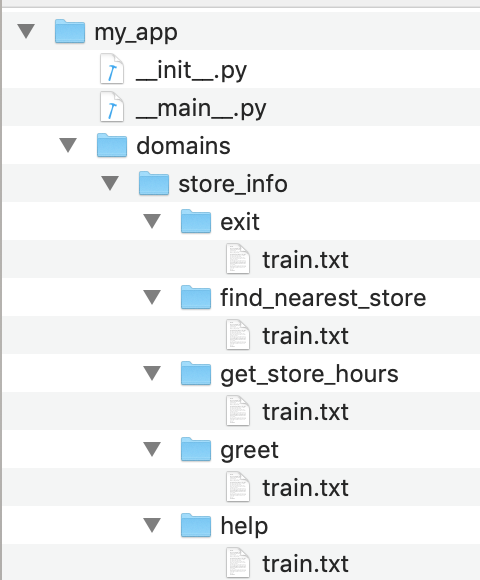 Since this application contains only a single domain, store_info, a domain classifier is not necessary. If additional domains were present, we would need separate sets of training queries for each domain. By default, training data for a given domain consists of the union of all labeled queries for all intents belonging to that domain. For example, training queries for the store_info domain would consist of the union of all queries in the greet, get_store_hours, find_nearest_store, exit and help intents.

Since the store_info domain contains multiple intents, we will use the labeled query text files to train the intent classifier for this domain. The example queries in each individual file should illustrate the typical language patterns associated with each intent.

For example, the train.txt file under the greet intent folder captures many of the different ways you might expect your users to express a greeting:

The train.txt file in the exit intent folder captures many of the different ways a user might exit your application:

As the example shows, each inline entity is appended by the pipe character followed by its associated entity type, then the entire expression is enclosed in curly braces. Annotations for names of system entities, which are built into MindMeld, begin with sys_. In the example, time is a system entity. This simple annotation scheme provides a convenient way to label entities in order to derive the training data required to train the entity recognizer models.

Labeled queries can also be used to train role classification models. This is not a requirement for our Kwik-E-Mart application, but to illustrate how it might work, consider the following user query:

Here, both 8am and 6pm could be defined as entities, perhaps of type sys_time. While the two entities share the same type, they play different roles in the query; one reflects the store opening time and the other is the store closing time. MindMeld provides the capability to train models to perform this role classification. Simply supplement your labeled queries with additional role annotation, as shown below.

Entity mapping files specify the training data required for entity resolution. Entity resolution is the task of mapping each entity to a unique and unambiguous concept, such as a product with a specific ID or an attribute with a specific SKU number. In some cases, this mapping may be obvious. For example, the phrase 'Eiffel Tower' may always unambiguously refer to famous Paris landmark. In most applications, though, users describe the same object in many varied ways. For example, some people might refer to 'Bruce Springsteen' as 'The Boss.' The word 'Tesla' might refer to the famous scientist or the electric car company. Customers ordering a 'diet cola,' 'diet coke,' or a 'diet soda' might all expect to be served the same beverage. In MindMeld, the entity resolver identifies the unique and unambiguous concept associated with each entity. 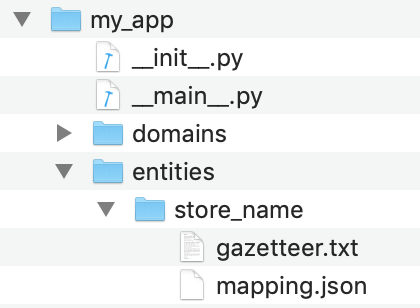 The entity mapping file specifies a canonical name, or cname, and a unique object id for the entity. Alternate names or synonyms by which users might refer to the entity are specified as items in the whitelist array. MindMeld relies on the data specified in this file in order to associate each natural language entity with a unique and unambiguous concept. See the User Guide for details.