For any given domain, there may be one or more intents, like "order drink" or "cancel order," which reflect what the user is trying to accomplish. You define the intents for your application by abstracting them from the dialogue states you scripted in Step 2. The intent classifiers predict which of the intents is expressed in a given request.

A fourth and final classification step, called role classification, is required when entities of the same type need to be interpreted differently to understand the request. For example, "9 AM" and "5 PM" could both be classified as time entities, but one might need to be interpreted as playing the role of an opening time and the other as playing the role of a closing time. The role classifiers label such entities with the appropriate roles.

Step 7 and the User Guide provide more details on the NLP classifier hierarchy utilized by MindMeld.

We could design the NLP model hierarchy for our simple Kwik-E-Mart conversational application to resemble the illustration below.

The single domain in this rudimentary application, store_info, encompasses all of the functionality required to find information about Kwik-E-Mart retail stores. The store_info domain supports five initial intents:

By convention, intent names are verbs that describe what the user is trying accomplish.

Neither of these entity types require role classification.

By convention, entity names are nouns that describe the entity type.

Having completed the design of the domain, intent, entity and role hierarchy for our example application, we can begin implementing the application using MindMeld.

Please install MindMeld before proceeding with the instructions below.

Every MindMeld application begins with a root folder to contain all of the application's training data files, configuration files and custom code. For our example, let's define a root folder called my_app.

The folder structure inside the root folder defines the domain and intent hierarchy for your application. Create it according to the following procedure:

This folder structure organizes the training data for the machine learning models in your application. Now, create a folder structure to organize the data files used by the entity recognizer, role classifier, and entity resolver models.

If you manually created a my_app folder following the instructions above, be sure to delete it before invoking the blueprint method.

Running the blueprint() method for our simple example application produces the root directory structure illustrated below.

See the User Guide for more about blueprints, and root folder organization and structure.

Given the simple interaction proposed in the preceding section and hierarchy we have now defined, we would expect our trained natural language processing models to yield the results illustrated below. 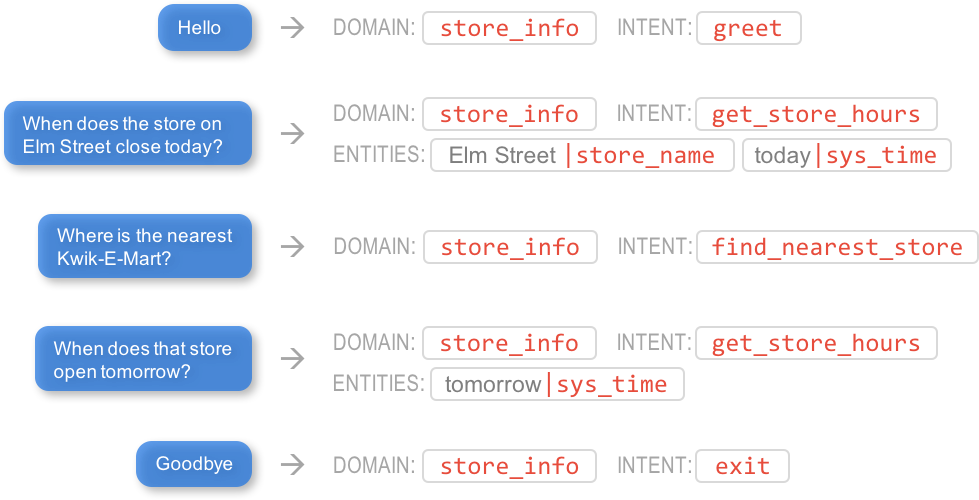 Next, we explore how to introduce training data to the defined folders in order to build machine learning models that parse and understand user requests as shown above.